Coinciding with the one year anniversary of Brisbane Airport’s second runway becoming operational, Brisbane Flight Path Community Alliance (BFPCA) today released devastating data on the additional impact of excessive noise pollution from Brisbane Airport’s flight paths on school children. BFPCA have estimated that more than 50 schools are regularly overflown by aircraft – totalling a student population of more than 50,000 school children. The map shows the location of those schools overlaid by the actually flown flight paths – both for north-easterly and south-westerly winds – based on data published by Airservices Australia.

BAC grossly underestimated the number of schools that would be affected by the new flight path design. In the 2006 Environmental Impact Statement (EIS), BAC suggested that

on opening of the New Parallel Runway, there will be an increase of approximately nine schools subject to communication interference…

BFPCA Chair David Diamond said, “It’s much worse than what we thought. We knew BAC’s estimate of nine schools affected was nowhere near the actual number of schools underneath flight paths. And this only scratches the surface, as we have been very conservative in our estimates, and we haven’t yet included other vulnerable groups such as people in aged care, retirement villages, and hospitals.”

The schools most affected are those closest to the airport, e.g. on the southside: Bulimba, Balmoral, Hawthorne, on the northside: Hamilton, Hendra, Ascot, New Farm. Due to the elongated design of the flight paths, schools in suburbs all the way out in Upper Brookfield, Pullenvale and Samford Valley are now under flight paths, too.

David Diamond says, “As the airport reaches its pre-COVID capacity, there will be a doubling of the frequency of overflights. Now with the additional capacity from the second runway, BAC targets demand from both passengers and cargo for 110 flights an hour, so there will be no respite for teachers or students.”

The scientific evidence on the association of aircraft noise at school on children’s reading comprehension and learning abilities is definitive. Peer-reviewed research in the prestigious medical journal The Lancet confirms:

Schools exposed to high levels of aircraft noise are not healthy educational environments.

The research further confirms that school children may not complain as they may not perceive aircraft noise to be a personal annoyance. However, clinical effects occur regardless of whether a person finds loud noise annoying. Noise exposure has physical and psychological (psychosomatic) effects even if we are not aware of them. Chronic, continuous or repeated exposure leads to more progressively severe and lasting long-term effects.

On his last day as Minister for Infrastructure, Transport and Regional Development, Michael McCormack said,

“I expect Airservices to perform its functions consistent with Australia’s international obligations where appropriate, including the requirements of the International Civil Aviation Organization (ICAO).”

“There is robust evidence for an effect of aircraft noise exposure on children’s cognitive skills such as reading and memory, as well as on standardized academic test scores. Evidence is also emerging to support the insulation of schools that may be exposed to high levels of aircraft noise.”

BFPCA’s analysis used a methodology of combining data from a community survey of more than 2,000 study participants plus reports and complaints received from parents of affected school children, and comparing it to overlays of actual flight path data from Airservices Australia to identify impacted schools (see above map). Student numbers were sourced from the MySchool and Good Schools websites.

12 July 2021 marks the one year anniversary of the launch of the New Parallel Runway at Brisbane Airport. Today a year ago, Queensland Premier Annastacia Palaszczuk, Queensland Governor Paul de Jersey, and Brisbane Airport Corporation (BAC) Chairman David Peever cut the red ribbon that signaled an increase in the airport’s capacity from 52 to 110 flights an hour.

BAC celebrates its New Parallel Runway as a major milestone that allows it to outperform Melbourne and Sydney airports. BAC’s capacity is now on par with major international aviation hubs such as Singapore and Hong Kong. However, this steep increase in capacity is only possible without implementing any international best practice noise abatements. As a result, Brisbane communities pay a high price due to the constant excessive noise pollution affecting families, children, and communities across more than 30 Brisbane suburbs.

Airservices Australia is expected to commence its Post-Implementation Review (PIR) this month. BFPCA are urging all affected residents and communities to take action and engage in the PIR process and submit feedback how the flight paths impact on their lives. BFPCA offer a step-by-step guide on how to register and have your say.

Brisbane families and communities have been suffering from excessive noise pollution and associated health and related impacts from Brisbane Airport’s new flight paths launched in July 2020. A vast number of community grievances submitted to the Aircraft Noise Ombudsman (ANO) triggered his multiple complaints review that is investigating Brisbane Airport’s and Airservices Australia’s Environmental Impact Statement (EIS) and its community engagement as part of the flight path design process.

The Brisbane Flight Path Community Alliance (bfpca.org.au) has come together to fight back on behalf of all Brisbane families and communities experiencing this noise pollution. Our survey research and investigations identified flawed and inadequate community engagement and misleading noise modelling. 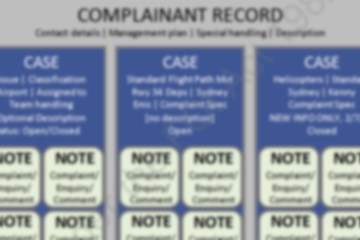